Francisco Chavez was born in Jerome, Arizona, on the tenth day of the tenth month in 1935. Frank’s family later moved from Arizona to Los Angeles in 1943. He attended Roosevelt High School and graduated in 1953. In 1976, Frank went into business as a supplier of fabric for professional picture framers. He then sold his business in the early 1980’s; but, he continued in the framing industry for several more years. In 1998, Frank again began his own business under the name Frank’s Fabrics for Framers. Under Frank’s vision and stewardship, Frank’s Fabrics has been very successful and continues to thrive to this day. In 1992, Frank met his soulmate, Amy darling, and they celebrated their 25th anniversary in December, 2017. Frank and Amy spent their years dancing, laughing, and growing together. Their love for one another and devotion to each other was evident to all who know them. Frank will be remembered as a kind, creative, and gentle man who loved his family and friends unconditionally. He enjoyed bringing his loved ones joy through his generosity, his humor, and his wonderful singing and ukulele playing.

Frank always had time for anyone who stopped to visit him at a trade show, to learn, or to ask a simple question. But more than that, he also was a craftsman, an artisan, and recognized the value of framers creating a custom-made product. He wanted everyone to succeed. He will be sorely missed, not only by his family but also by so many framers across North America who had the privilege of meeting and spending time with this gentleman. Farewell, Frank.

John Ranes II
Owner, The Frame Workshop of Appleton
Frank and I first met at a trade show in New York City about 30 years ago. I saw Frank with his cool glasses and his smile, and soon learned that he was an en- tertainer who loved people. What a fabric collection he had: beautiful linens, silks, poly fabrics. Watching him demonstrate at shows was inspiring. And of course, we always got the help we needed when we gave him a call. Frank treated all of us like we were his dearest friend. He was a special person who will always be in my thoughts and in my heart.

Susan Boni
Owner, Frames of Mine
I knew Frank for over 35 years. I am proud to say that as companies who competed for the same business, we shared many of the same goals and objectives— always putting the picture framing industry first. We always joked that if we could sell one yard of fabric to just one framer in every state every day, we would be over-the-top successful. Frank is legendary, as far as I am concerned. He advanced the use of fabric in picture framing. And in our own kindred philosophy, we agreed that every picture frame should always have either a fabric mat or fabric liner otherwise, it wasn’t truly “framed.” We also shared a love of dancing. In the early days when we traveled to the different trade shows around the country, we always were the first and last on the dance floor. Frank was a modern-day Fred Astaire—those are my fondest memories of him. Every time I spoke to him on the phone and I asked him how he was doing, he always answered, “Perfect.” His sense of optimism was contagious!

Larry Neuberg
President, Neuberg & Neuberg Importers Group, Inc.
Frank tirelessly gave to our industry. His company was a pleasure to do business with. He upped the custom framing bar by making the use of fabric easier through product, support, and education. He recognized that not everyone wanted to “do it on their own” and offered custom-covered mats that made selling fabric mats and liners easy. It was a special treat to hear, “Frank’s Fabrics, this is Frank” when I was fortunate enough to have him answer the phone. As busy as he was, he always made time to chat. He demonstrated innovative designs and techniques. His partnering with Bonnie Palizzi brought us the Flexible Fillet, a fabulous design accent. Frank generously supported the PPFA and sponsored an award for the Best Use of Fabric in its framing competition. He never turned me down when I needed something to show in my classes. He was a kind, compassionate, and caring man. I am a better person for having known him. May his memory be a blessing.

Rob Markoff
Owner, Artrageous! Art and Framing
What a shock to hear this sad news. Frank was so patient, kind, and accommodating when I contacted him back in 2006 to see if he would ship his fabric and glue to Canada. I think I was his first Canadian customer! He and Baer Charlton were the ones who started me on fabric wrapping, and although I don’t do a lot of it, it was wonderful to learn from the best. My deepest condolences to Frank’s family and colleagues at Frank’s Fabrics. He will be truly missed.

Karen Haverstock
Owner, Haverstock Creative Designs
I will always remember Frank’s kind eyes and smile, his patience, and his industry furtherance and support. Frank walked me patiently through my first fabric wrapping of a liner moulding over the phone. He sponsored “best use of fabric” awards in framing competitions, from which I have proudly benefited. He took me to lunch in Las Vegas during the WCAF Expo just to have friend-to-friend conversation. He always showed great interest in my business and was a cheerleader. I will truly miss this man.

Donna Erwin
Owner, Columbia River Gallery
I am so incredibly sad to read about the loss of Frank Chavez. Small companies like Frank’s are a big part of what makes our little industry tick. Small companies run by delightful people who truly care about their customers are a treasure. It was always such a pleasure to pick up the phone and speak with Frank, and he will be sorely missed in our business. Jeff and I send the Chavez family our deepest condolences.

Kirstie Bennett
Owner, The Framer’s Workshop
I always enjoyed talking with Frank at the WCAF Expo each year and loved seeing what new, stylish glasses he would be wearing! A few years back I picked up a new set of “frames” at one of the eyeglass boutiques at the hotel after being inspired by Frank’s latest. Whenever I would get a compliment on my selection, I would always make a point to share my story about Frank of Frank’s Fabrics.

Larry Pearl
Owner, Newburyport Framers
When I opened my frame shop, Frank was so helpful. I often felt like my little orders must be a nuisance, but Frank made me feel like I was his most important customer. It made me want to order more, so I showed fabrics more often and my orders increased. At trade shows it was always a pleasure to see Frank. I don’t recall ever seeing him without a smile on his face and in his voice. He loved our industry, and our industry loved him. Rest in peace, Frank.

Greg Perkins
Former marketing manager, Larson-Juhl
Many people come into our lives, but few have the qualities Frank had. He always showed love, not judgment. Honesty and integrity were consistent personality traits he never drifted from, whether in personal or professional relationships. His creativity and contribution to the framing industry is second to none. Thank you, Frank, for being part of my life. I will always miss him.

Bonnie Palizzi
Former owner, The Designer's Wall
When you came in contact with Frank, there was always a feeling of warmth and compassion. His talent and love for the framing industry spoke for itself. His clever ads and his hands-on fabric demonstrations made one want his products without really realizing he was selling you something! He was a true leader in supporting education. Frank knew how to create a simple, elegant presentation by upscaling using fabric. His message was simplicity with fabric—all types of fabric. If you needed fabrics, Frank’s was the place to go. As an award-winning designer, 99 percent of my designs incorporated fabric and Frank was always my go-to guy. Our industry was blessed with one of the best in providing innovative fabric products that have given many framers a profi table and exceptional design option. To my colleague and good friend, you will be missed. 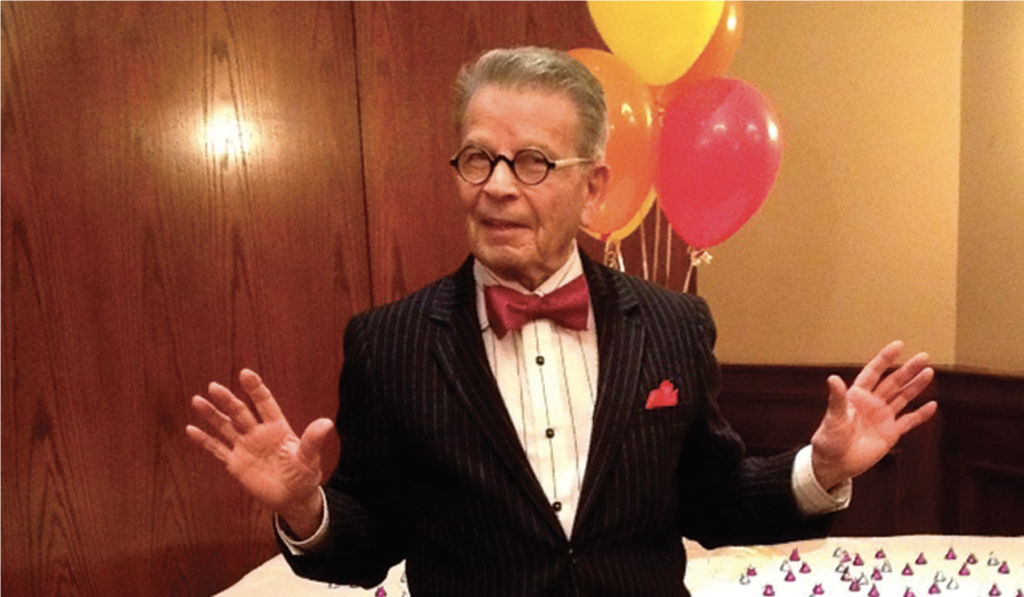 Amy and the Family would like to thank Picture Framing Magazine for the beautiful tribute to Frank! We’re so grateful.